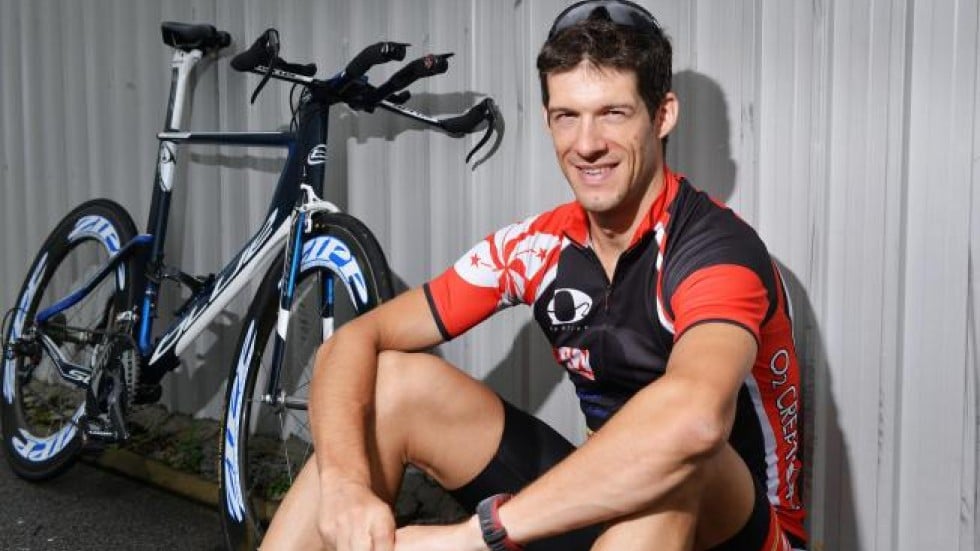 After Erich Felbabel established sporting apparel company O2 Creation in 2009, he knew sponsoring a triathlete would help promote the brand; but at a cost to the emerging business. So he decided he would sponsor himself – becoming a professional triathlete.

Not that it was a challenge for the 34-year-old Frenchman, who was hooked on triathlons after discovering the sport four years earlier while working in the automotive industry in Guangzhou.

“I was quite crazy,” he says. “There were no triathlons in China so I would take the train to Hong Kong for a day just to race.”

When Felbabel later moved to Zhongshan, he took his sport to the next level by training for the 2007 Ironman Australia in Port Macquarie. He would jump the fence of the local pool to swim at 5am in the peak of winter, run on the road through polluted factories and ride his bike on a wind trainer in his apartment.

The move to Hong Kong in 2008 allowed Felbabel to finally “get a breath of fresh air” and inspired O2 Creation. But he didn’t wish to sacrifice his training: “I knew when I started, I still wanted to enjoy myself and do more sports than I was doing before.” Being his own brand’s ambassador has allowed him to throw himself into his passion while still creating a thriving business.

Felbabel admits he is not as competitive as other pros, but the opportunity to race at an elite level has its perks. “When you compete as a pro, you start on the same line as the pros and you are putting your bike next to theirs. Of course, they are better, but still it is very cool.”

But intense training took its toll. Two years ago he suffered an Achilles injury from overtraining. A torn hamstring injury from his youth also lingered and forced him to scale back on competing.

These days, Felbabel trains smarter, not harder, and considers himself a “lifestyle triathlete”.

“It’s not a sport, not a short-term target, not a job. Now it’s just something I do for leisure and pleasure,” he says.

What is it that gets you out of bed in the morning?

I love the challenge of running my own company. You always have 20 ideas on your mind; I have lists everywhere. I also love the freedom that it gives me.

I agree that there is a big mental part to completing triathlons, but I’ve never found it more important; maybe I don’t push enough. For me, when I’ve done the training, the mental part just comes naturally.

What’s your worst leg in triathlons?

Swimming – I hate it. I have to swim 1.9 kilometres in a half-ironman and takes me about 27 minutes, which is too long. I only do the swim so I can get on the bike, which is my favourite leg.

How do you keep up the intensity during a triathlon?

I love the competition. Because I’m not so good on the swim, I always come out of the water at the back of the pack and then I’m competing and fighting for it from start to finish. I enjoy working hard to overtake guys on my way to the front. It’s what keeps me going.

Has injury made you a better athlete?

My injuries have been a combination of bad luck and not knowing when to stop. Every athlete is used to pushing beyond the pain, but now I know when I need to rest and when to push, and in that way it has probably made me better. Also, after I got the Achilles injury, I took on a coach to learn how to train more intelligently.

Is it about quality or quantity of training?

I’m all about quality these days, since my injuries. There is no point running if you are sick as a dog, or doing too much if you lose the quality of the training. Having said that, it’s important to have a quantity of training behind you first, otherwise the quality training won’t work. There is a balance.

I love sweets, which I know are bad, but it’s also a good thing as it means I can eat a lot of them during a race. This allows me to eat lots when I’m on the bike and replenish my lost sugars and energy during a race.

In between juggling a business, children and a triathlon career, how do you relax?

During training there are plenty of sessions which include easier aerobic stuff, so that’s relaxing. Otherwise, I like to read. Right now I’m reading Scott Jurek’s Eat and Run and my last book was a triathlon book. I guess these are all related to my sport, but it is still relaxing. When you like what you do, it’s never hard work.

This article appeared in the South China Morning Post print edition as: As I live and breathe